Passive acoustic monitoring has become an important tool in fisheries and ecological studies and we know very little about fish sounds, particularly in the Pacific Ocean. There are less than 1000 species of fish that have been documented to produce sound, compared to the 30,000 fish species that exist in the world. MERIDIAN team member, Amalis Riera is collaborating with a few captive facilities to try to describe as many fish sounds as possible from the Pacific Ocean. These will contribute to building a catalogue of known fish sounds that will then be used to identify sounds collected by passive acoustic studies.

There are six locations where Amalis has collected acoustic recordings in search of fish sounds between Vancouver Island, Vancouver, Washington State and Oregon. So far there are over 3,000 hours of recordings, some of which have been analyzed and some others that still remain to be inspected. The tanks and net pens where the hydrophones were deployed contained fish species such as Arctic cod (Boreogadus saida), grunt sculpin (Rhamphocottus richardsonii), Herring (Clupea pallasii), Lingcod (Ophiodon elongatus), Northern ronquil (Ronquilus jordani), Pacific cod (Gadus macrocephalus) Red brotula (Brosmophycis marginata), sablefish (Anoplopoma fimbria), saffron cod (Eleginus gracilis), walleye pollock (Gadus chalcogrammus), and white sturgeon (Acipenser transmontanus).

Amalis has already validated sounds from Arctic cod, walleye pollock and sablefish, thus contributing to the catalogue with two species of Pacific Ocean gadids and one Pacific deep sea species. A large number of recordings that were analyzed contained no fish sound. It is important to keep in mind that no sound heard doesn’t mean lack of capacity for sound production.

The MERIDIAN team is working on creating automated detectors that can recognize several types of fish sounds. The more examples of sounds of a given species we get, and with low background noise, the better we can train neural networks to recognize that signal in large acoustic datasets. 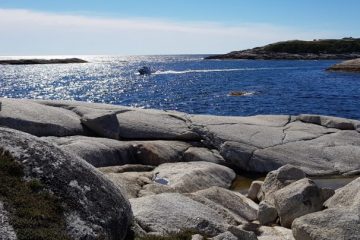 Many marine species have evolved to rely primarily on sound for underwater navigation, prey detection, and communication. Marine biologists and other ocean researchers listen to the sounds generated by marine animals, for example, to detect Read more…