MERIDIAN’s Progress Over the Years

As demand for resources continues to grow, nations turn their attention to the ocean, not least Canada with its world’s longest coastline. Along with the changing climate, the increased human presence impacts the marine ecosystems, especially in the Arctic. Therefore, to ensure sustainable use of marine resources, we must keep a vigilant eye on our ocean’s health.

To monitor what is happening under the water’s surface, researchers use their ears rather than their eyes. Across the globe, large numbers of underwater listening stations are being deployed, some from floating buoys, others attached to small autonomous submarines, all recording the underwater soundscape and generating large amounts of complex acoustic data which holds a wealth of information about the ocean’s health. This data has unique characteristics and often requires linking of various databases. For example, acoustic data are used to track the movements of endangered marine mammals, or quantify the amount of noise pollution created by marine traffic. Massive amounts of such data are and will be generated by underwater sensors.

The MERIDIAN project, funded in 2016 under the CFI Cyberinfrastructure program, with provincial support from Nova Scotia, Québec and British Columbia, using Compute Canada’s infrastructure, and headquartered at Dalhousie’s Institute for Big Data Analytics, was aimed at bringing the advanced AI and Machine Learning methods to derive from this data useful, actionable knowledge. In the span of three years, MERIDIAN has established itself as a unique endeavour in Canada and internationally, advancing the use of Big Data, AI, and Machine Learning in ocean science, to the benefit of our oceans.

Key achievements of MERIDIAN include the development of two open-source software packages, Ketos and Kadlu, now actively used by half a dozen research groups in Canada and internationally for developing novel acoustic detection and classification algorithms based on Artificial Intelligence (AI). Another major contribution of the MERIDIAN project has been the development of a web-based Ocean Soundscape Atlas, an application allowing researchers and ocean managers to visualize ocean noise pollution created by vessel traffic, and to quantify its impact on endangered marine species.

In its short lifetime, MERIDIAN has built a large number of partnerships and collaborations, working with academic researchers, government scientists and NGO groups on solving pressing issues, such as protecting the endangered North Atlantic right whale on Canada’s east coast. Over 15 data scientists and technicians have been trained by MERIDIAN with unique skill sets that combine elements of ocean science and marine biology with advanced Data Science and Machine Learning. Moreover, MERIDIAN has been active in knowledge transfer, organizing workshops and – recently – webinars to train Canada’s ocean researchers in the use of data science and machine learning. These webinars attracted considerable interest seeing over 50 participants on average.

While the MERIDIAN project is coming to an end this year, the MERIDIAN team will continue its efforts to advance the use of Big Data, AI, and Machine Learning in ocean science in the years to come. Supported by a CFI 2020 Innovation Fund award (Project #40082), Research Nova Scotia, and Dalhousie University, the team will be working on the “Artificial Intelligence Meets Oceans” project, building the Marine Artificial Intelligence Platform (MAIPL). MAIPL will be a virtual laboratory that will make its AI toolkits accessible to a wide range of Canadian and international ocean researchers.

Listening under the waves at Tl’ches

MERIDIAN to present at the Advances in Marine Data Science Session

We are thrilled to announce that MERIDIAN researchers Bruno Padovese, Fabio Frazao and Sadman Sakib will be presenting at the Advances in Marine Data Science session organised by SFU’s Big Data Hub on August 24th Read more… 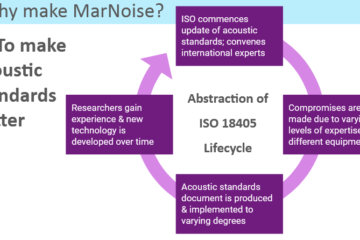 MarNoise is a Python package for calculating underwater acoustic standards from ISO 18405 in an open and reliable way. An initial release will be available by October 2021.